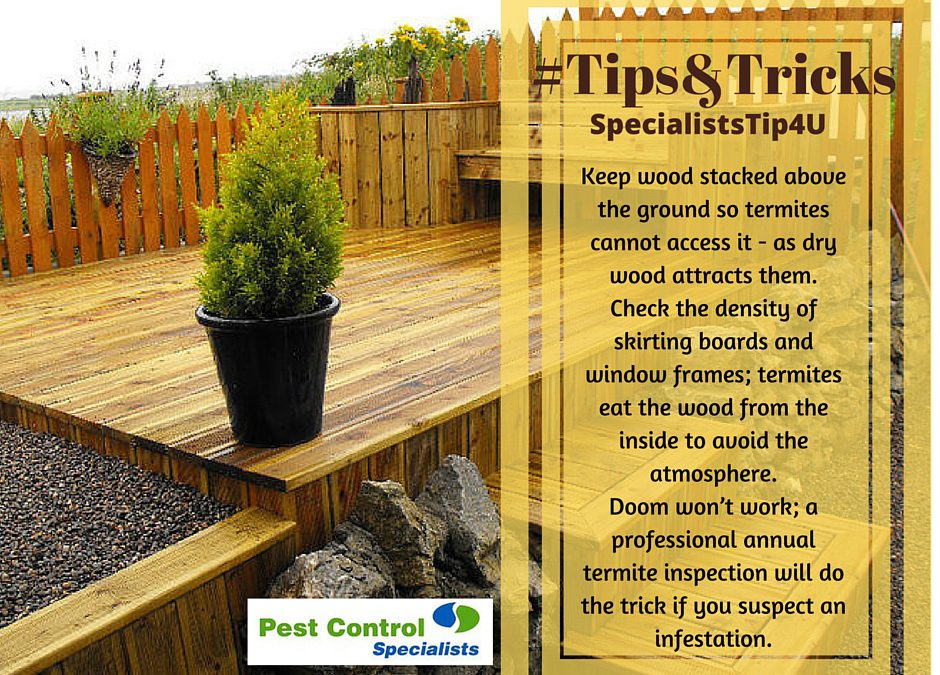 Summer is upon us, and with it come days drenched in sunshine, and in many parts of the country, rainfall too. While school kids and gardens rejoice, this time of year is also known for its unwelcome guests – in the form of termites. Termites are prevalent throughout South Africa, with the exception being along the coast from Western Cape to a portion of the Eastern Cape, where their presence is limited. These pests cause millions of rands worth of damage annually, which means that termite control is crucial.

Subterranean termites thrive in underground colonies consisting of mud tunnels or tubes, as they rely on soil to survive. Colonies can grow up to two million members, consisting of a hierarchy of a king, a queen, winged reproductives, soldiers and workers. Much like Queen Elizabeth II, the queen termite’s rule is a lengthy one – with an average lifespan of 50 years. The queen lays thousands of eggs daily, and these hatch out into workers, soldiers and winged reproductives. These are the termites that fly out when the climate is right - usually when the air is moist – in order to establish new colonies. Subterranean termites eat cellulose, found in wooden items such as skirting boards, door and window frames, and roof beams. Termites find their way into buildings from their underground nests via the expansion joints between the foundations and the walls (which is why the skirting boards are usually the first source of food to be attacked), and can tunnel their way between the bricks of a double wall up into the roof. Termites have a transparent layer of skin, making them susceptible to the dry atmosphere, which is why they do not walk around like ants (they will dry up). Because of this, their presence is usually unnoticed until the damage caused is already considerable. Their excrement is known as carton – which resembles a hard, cardboard material.
See also  Signs that your industrial pest control provider is awesome

Drywood termites – as their names suggests - make their homes in dry wood, such as dead branches, attic framings, door frames, and wooden foundations.

While equally as destructive as their subterranean relatives, Drywood termites don’t rely on soil to survive, opting instead for any dry, wooded area that offers plenty of food for their ravenous colony. Their excrement – known as frass – resembles fine grains of sand, as is often found between wooden floorboards or underneath wooden beams. They eat their way through wood, going across the grain, leaving haphazard patterns in the infested wood.

Unlike rodents or cockroaches, identifying these wily pests requires some detective work.

As explained earlier, it’s highly unlikely that you’ll spot a termite scurrying across your floor. Ensuring you’ve got a handle on termite control then, requires some Sherlock-Holmes-esque sleuthing. The first thing to look for is frass, which will appear in little piles underneath any wooden structures. This indicates the presence of Drywood termites. In wetter regions, subterranean termites inadvertently give away their hiding place when mushroom-like fungi appears. Also look out for a mud-like soil on the bark of trees – another indicator of a termite infestation.

Spraying a suspected termite infestation with Doom won’t do the trick. The termites will merely move along and find another source of food in the vicinity. In order to ensure your home is protected, an annual termite inspection should be conducted. If you’re in the process of breaking ground on a new home, it’s crucial that your property undergoes termite control in the form of soil poisoning before the foundation is built. This must be conducted by a professional pest control service in order to ensure that the treatment is effective. (You can read more about this process in our blog on soil poisoning here.)
See also  Myths about business pest control services debunked
We offer a wide range of pest control services – including termite control. Contact us today to ensure that your home or business is protected from these destructive pests.